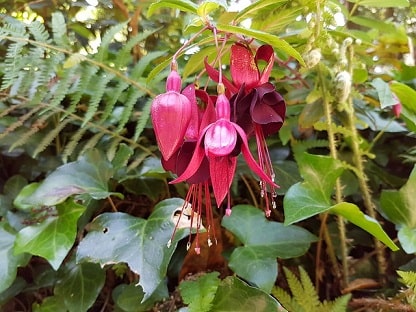 Fuchsia plant is an interesting shrub. It has a very attractive appearance so many people choose to have it in their gardens. At the same time, Fuchsia is a plant with a long and interesting history. It’s been a popular greenhouse plant for centuries (more than 200 years!) This is a small-flowered plant originally from South America. This plant is known for a very long hybridization process which gave us numerous varieties that are ideal for gardening.

A simple little shrub from South America has now become a stronger, richer and more attractive plant. Hybridized varieties that are used all over the world have more prominent flowers in new colors.  It is therefore not surprising that so many people choose to grow Fuchsia plants in their gardens.

As noted above, this beautiful shrub originates in South America. From there, it found its way to England and the Continent. This is where it became a popular plant with the invention of greenhouses about 200 years ago. Numerous efforts in hybridization eventually gave use thousands of varieties of this plant.

Out of these, a few hundred made their way to the U.S. Pacific Coast. There, it became a popular garden plant for coastal homes. It originally became popular in California because of the climate. The gentle breeze from the Pacific is great for these plants: it can temper the strong summer sun and prevent damage from cold in the winter.

This is where timid greenhouse plants developed into big, string shrubs that could flower all the way from May to Christmas. People in California slowly began to admire this shrub and The American Fuchsia Society was organized in 1929 in the San Francisco area. This prompted gardeners to collect and import existing varieties from Europe. As a result, a few hundred or named varieties of Fuchsia plants became known in the U.S. In addition to this, Californian breeders developed new varieties of Fuchsia plants, with additional range of types and colorings. This paved the way for introducing new, superior varieties.

The new varieties were stronger than their ancestors. They could survive in a wider range of climatic conditions. It became possible to keep Fuchsia plants outside of California and similarly warm climatic zones. However, colder climate required different approaches to growing Fuchsia plants. In these colder climates, Fuchsia became a popular choice as a potted plant or a greenhouse plant.

Unlike rich shrubs of California, greenhouse and container Fuchsia gardening wasn’t always as successful. A lot of mistakes have been due to the lack of understanding of what this beautiful plant actually needs. The good news is that we have learned from past mistakes.

Today, it is possible to grow Fuchsia plants in numerous climatic conditions and in different ways. However, it is important to provide your Fuchsias with everything they need to thrive. There are some specific care requirements you need to follow in order to grow strong and beautiful Fuchsias.

One of the most important things you need to understand if you wish to grow Fuchsia plants are climatic requirements. These plants need some very specific growing conditions when it comes to climate and you need to adhere to these requirements.

Keep in mind that native Fuchsia plants lived in tropical climate, typically in partly shaded areas. They mainly lived in uplands and foggy coastal areas in South America. Their active period of growth coincides with the rainy season in all of these habitats.

During this growing season the humidity is very high but the intensity of sunlight is low because of the clouds and the shade provided by the surrounding vegetation. This is an important thing to remember if you wish to grow Fuchsias.

In order to make your cultivated Fuchsia plants happy, you need to simulate these conditions. In other words, the plants need to be in a shade and planted in a humid area. Their roots need a constant supply of moisture. This is the only way to make your Fuchsias thrive.

While you might not be able to provide all of these exact conditions, keep in mind that direct sunlight and high temperatures are extremely dangerous to Fuchsia plants. This is one of the reasons why it was originally so difficult to grow these plants in the eastern U.S. due to the high summer temperatures.

Luckily, there are some particularly hardy varieties of Fuchsia plants you can choose if you wish to grow these plants in less than ideal climatic conditions. At the same time, it is important to always be aware of the exact care requirements that your plant needs so you can avoid major problems.

If your climatic conditions are less than ideal, there is hope. Years of research and plant breeding in California gave us numerous superior varieties of Fuchsias. Some of these varieties are particularly hardy and can be grown in the eastern U.S.

These heat-tolerant Fuchsia hybrids are typically singles with white or apricot tubes. Also, there are hardy single and double magenta varieties you can try.

Red and purple and red and white colored Fuchsias are the most popular ones in the eastern U.S. while the wide range of new colors are almost unknown in this part of the United States. The truth is that many of the delicately colored Fuchsia plants simply are not hardy enough for the warm summers. They cannot withstand the heat so they cannot be grown away from the California coast. The good news is that the orange varieties and magenta varieties can be tested in the eastern U.S. Many people report excellent results with them.

There are many gardens in California that are completely devoted to Fuchsia plants. They are grown as shrubs, pillars, dwarf foreground plants, as vining arbor coverings or as plants in hanging pots. Fuchsia plants proved to be strong and able to climb a two story house. You can even choose varieties that have a restrained woody growth to make fine standards or trees 4 to 8 feet high. Finally, there are special varieties chosen particularly for hanging pots and window boxes. As you can see, California offers numerous opportunities for growing Fuchsia plants. If you live in a different climate, don’t worry: chances are that you will be able to grow Fuchsias, but you need to choose a hardy variety.