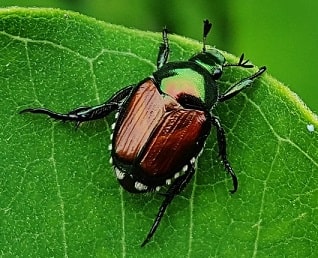 Japanese beetles are feared by gardeners because both their adult form and grubs have the ability to turn a garden into a pile of dead plants. Thus, in this garden pests article, we are going to provide you with a few tips on Japanese beetle control and some effective and proven ways to kill Japanese beetles.

Japanese beetles feed on most plants that are available in your garden. They rarely pick their food and both the adults and grubs are cool-blooded plant killers.

They chew on flowers and leaves but leaving out the hard part, such as the stem, branches and the skeleton of a leaf. The grubs on the other hand work underground. They feast on roots and one catastrophic destruction that they can cause will be a large brown patch on your lawn.

There are a lot of ways to kill Japanese beetles and we will explain each and every one of them for you in detail. Implementing all of them at once is not necessary because different geographical location might be suitable for different methods. Usage of these methods is also subjected to personal preferences and your type of garden.

Build Up a Repellent Wall

If you have a history of certain plants that will be infested with Japanese beetles during the spring or summer, you can always set up a repellent wall around the plants. The idea of this Japanese beetle control method is to chase these beetle pests away without having to work on destroying them.

There are a few things that Japanese beetles hate or will be harmful to them. Some of them are:

Soil with High pH – Japanese beetle hates to live on soil with a pH of 7 to 9. However, you need to know the adaptability of your plants to such high pH as well prior to adjusting the pH of your soil.

Larkspur – Japanese beetle will avoid larkspur as much as possible because larkspur will be toxic to them and will cause harm to their body. Thus, you can always plant some larkspur around your crops that are subject to Japanese beetle infestation.

Herbs Scent – Using herbs to repel insects is a technique widely used in vegetable gardening. Herbs like smartweed and geraniums work wonders when it comes to Japanese beetle control.

Japanese beetle traps attract the beetles into confinement by releasing pheromones of opposite sex and fake flower scent. The users of these traps seem to be fairly satisfied with the effectiveness.

Most of these traps are priced below $10 and you can see the effect (trapped beetles) almost immediately. Japanese beetle trap is a good buy if your garden is facing the infestation of Japanese beetles or other beetles alike.

Natural insecticides that you can use are rotenone, sabadilla and pyrethrum. Most of these are available for sale in major nurseries near your home. Please enquire your nursery for usage instructions as well.

Japanese beetles don’t bite and they are not poisonous either. Thus, it is definitely safe to pick them using your hands as a Japanese beetle control measure.