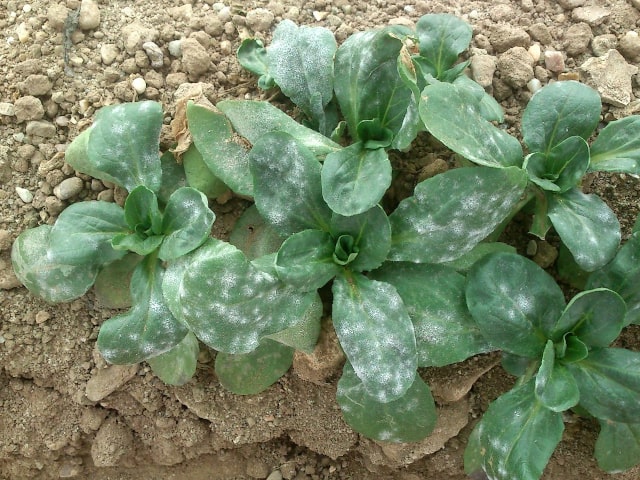 Powdery mildew is a common plant pest all owners should know about. This fungus (botanical name Microsphaera penicilliata) affects many plants, so it’s important to know how to deal with it.

“Mildew” can mean many things. It’s usually referred to discoloration and growth caused by many different species of fungi. When it comes to gardening, the term “mildew” usually applies to 3 specific fungal diseases:

They are all nasty, but powdery mildew is the most common of them all and can spread very quickly. For these reasons, it’s important to know how to recognize and effectively fight this fungal disease.

Powdery mildew can affect just about any plant, so all plant growers should be aware of it. There are, however, certain species more susceptible to this disease, above all roses, lilacs, phlox, bee palm as well as pumpkins and other members of the squash family. If you own these plants you should take special attention in case powdery mildew appears.

Also, all plants growing in shady areas are at risk. Same goes for plants growing crowded together where air circulation is poor. It’s important to understand these conditions can make powdery mildew appear even in arid climates. High humidity levels (even if it’s just at the microclimate level) and high amount of rain also contribute to the problem.

How to Recognize Powdery Mildew

Powdery Mildew is easy to recognize. Common signs include:

Powdery mildew can ruin the appearance of your plants and make them look unhealthy. However, the good news is that, if spotted early, this fungal disease is not very dangerous or harming. Most of the plants shed their leaves so the mildew goes with it. In some cases, it may not even be necessary to treat your plants, unless you encounter a severe case of powdery mildew.

You may also use a remedy to treat your infected plants. This is a less invasive method than the first one, so it works best for mild cases of the disease. You may choose a commercial product to treat your plants or you can make a homemade remedy to get rid of powdery mildew. Commercial fungicides containing sulfur are often very effective against this disease.

Make a solution of 1 tablespoon of baking soda in one quart of water. Spray the leaves and other affected areas. It often requires a second application but is very effective. Another effective remedy is a solution of 1 part milk to 9 parts of water.