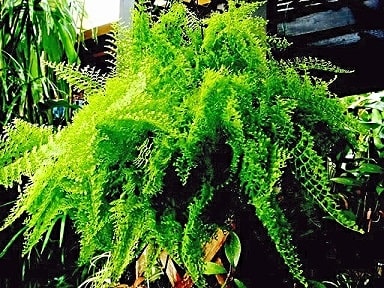 Ferns come in a wide variety of foliage forms and patterns, which makes them very popular houseplants. You may use them to decorate your home or patio, and you can grow them in pots or hanging baskets.

When choosing the best fern for your house, there are several things to keep in mind, such as how suitable it is to be grown in a container, the plant’s ultimate size and whether or not it’s an evergreen.

Out of all ferns you may choose to grow in your home, these 6 species are ideal for indoor care:

This fern is native of China, Japan and Korea. This plant can grow 18 to 20 inches in height. When you divide it, it has dark, shiny green leathery fronds. The divisions are sickle shaped. One form has deeply cut margins with long-pointed ends. It makes it resemble true holly. This plant is tolerate to drought and low temperatures. It’s best to be kept in humid areas and it can stand winter sun.

This is a popular variety discovered in the 1890s. Its parent is a tropical Nephrolepis exahata, a plant native to Cuba, Malaya, Mexico and South America. This plant can grow about 2 feet or more. When divided, its frond divisions are slightly ruffed. The fronds arch over with age. There are about 100 described descendants of these forms. For example, if you’re interested in a large form, with older fronds arching, choose variety called “Mrs Theodore Roosevelt”. it can grow up to 18 inches. About the same size but with more deeply cut fronds is form “splendida”.

When watering your Boston fern and other similar types of ferns it’s important to keep fronds on the dry side. Make sure to do all the watering directly into the pots. These plants prefer night temperatures above 50 degrees F. They like light but not direct sunlight and it’s important to provide them with enough ventilation.

It’s important to know that all Boston ferns are sterile and new plants are produced from stolons (runner-like off-shoots). If you want to propagate your plant, cover the stolons while they are still attached to the mother fern. If there are many new stolons, it’s important to remove some because they can prevent the parent plant’s proper growth.

One similar variety is the Tususima holly fern (Polystichum tsushima), native to Japan and China. It grows 10 to 12 inches in height and it has dark green fronds that are twice divided. Like true holly fern, this plant thrives in slightly acid or neutral soil and it can even withstand strong light.

These ferns are unique, with fronds erect and finely divided. The genus Davallia plants are evergreen and native to tropical geographical areas so they can’t withstand even light frost. There are many species in this genus, and the most popular ones are the Squirrels’ Foot fern (Davallia mariesii), native to Japan, the Hares’ foot fern (Davallia trichomanoides), from Japan, Ceylon and Malaya, Fiji Davallia (Davallia fejeensis), from the Fiji islands. Also, popular varieties are those from the closely allied genus Humata, such as the Hears’ foot fern (Humata tyermanii) and other small epiphytic ferns.

These epiphytic ferns can easily be grown in pots but they prefer oak logs, pieces of cork or wire baskets. They require high humidity, filtered and overhead light, good drainage and no overwatering. It’s best to use coarse potting materials, such as a mixture of potting mix and perlite (2 to 1 mixture).

Some other similar varieties of terrestrial (or soil grown) small to medium ferns which can be grown in pots include the Australian Cliff brake (Pellaea falcata), which requires light but not strong sun and some finely ground limestone in the soil mixture; another popular species is Pellaea rotundifolia, native to New Zealand, which likes shade and can resist drought, thrives on a soil mixture of leafmold, rocks and a little broken lime. Another popular species is the Mexican flowering fern (Llavea cordifolia). It prefers shade and you need to keep its fronds dry. Its fertile fronds are much contracted and divided at the ends so they slightly resemble green flowers.

This is a very attractive group of ferns, also known as “table ferns”. Most can be grown from spores or divisions. They enjoy soil mixture with a sprinkle of ground limestone.

Popular varieties include the Cretan brakes (Pteris cretica), which grows in clumps from short, slowly creeping rhizomes; this plant is native to the tropics and sub-tropics and it was first discovered on the island of Crete. Other popular varieties are Ribbon brake (Pteris cretica albo lineata) forms, native to Japan and the Chinese or spider brake (Pteris multifida, often sold as Pteris serrulata), native to China and Japan. One outstanding species is the Silver brake (Pteris argyraea), which has white foliage areas contrasted with bright green. Its leaves are erect and divided differently than with other pteris species.

This is a large species native to New Zealand, Australia, India and Malaya. It can grow up to 18 inches. It has medium green fronds arching over and it produces bulblets. It also grow young plants on the upper frond sides. You can also grow this plant from spores.

A similar but even larger species is the Bird nest fern (Asplenium nidus), which can reach over 3 feet in height if you grow it outdoors in subtropical areas. This plant has fronds that are not divided but they tend to be slightly wavy and leathery. It’s best to pot these plants in leaf-mold, peat moss or bark. It’s also good to give them occasional fertilizer.

Another popular species that can be grown in pots is Hart’s tongue fern (Asplenium scolopendrium). While it can grow very large in the wild it doesn’t reach more than a foot when grown in pots. This plant is native to Europe, Asia, Africa and parts of the United States. The most popular form for growing inside is a variety from England. It is more cut and varied in size.