5 Pepper Varieties to Grow in Containers 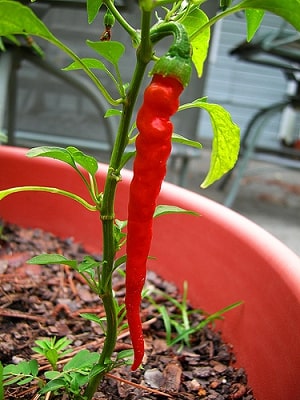 There are many different types of peppers you might want to grow in your garden or even in container. The possibilities are endless: peppers are a rich bunch with many different and special varieties. Depending on your tastes and gardening preferences, you may choose to grow mild, hot, sweet, giant or tiny peppers. Choose between bell peppers to spicy habanero peppers. Grow those weirdly shaped peppers in your home. Have peppers of all kinds whenever you need them, freshly taken from your garden.

It’s interesting to note that gardeners tend to have love/hate relationship with peppers. They either love peppers or hate them. Some people love them so much and are very passionate about growing them. Others see them as a nuisance and don’t want to bother with peppers in their garden.

However, peppers are not difficult to grow. If you like to eat peppers, then you might as well grow them all by yourself. Here are 5 pepper varieties you can easily grow in containers in your home or on your balcony.

These pepper varieties are ideal for warm and sunny balcony gardens. Choose between juicy bell peppers, Jalapeño peppers, Chiles de Arbol, cayenne peppers and the super spicy habanero peppers. They are all easy to grow in containers so even beginners can grow them in their home.

Bell peppers, also known as sweet peppers are known for their thick skin. They are not spicy, which means they get a zero on the Scoville scale. These peppers come in a wide number of colors: orange, green, yellow, red, and more. They differ in taste, so there are many different varieties you can try. As a general rule, green peppers are more bitter while red peppers contain more vitamins and nutrients (such as lycopene). Red peppers contain more carotene and about twice the amount of vitamin C than green peppers. The good news is that these peppers are very easy to grow. They can thrive even in small containers, so you can grow them in the kitchen. Also, if you grow them on a balcony, they will add color and vibrancy.

These peppers are very similar to bell peppers, but they are a bit spicier. On average, they measure about 2,500 to 10,000 Scoville units. Jalapeño peppers and bell peppers are the same container plant species – these are just two different cultivars, varieties of the same plant. Jalapeño peppers are very delicious and can be used in many different meals. These peppers look great in the garden, with their small white flowers and green fruits. These peppers thrive in small plant containers. If you want to grow them, make sure to plant them in 3 gallon (10 inch) containers. When grown in a pot, they can reach about 3 feet in height.

In Spanish, “Chile de Arbol” means “tree chili”. This type of pepper is also known as “bird’s beak chile” and “rat’s tail” chile. These are small peppers, only about 2 to 3 inches long. They are known to be spicy – these peppers measure about 15,000 to 30,000 Scoville units. If you don’t want such a spicy flavor, you should remove the seeds before preparing them for consumption. They are best to be grown in full sun and harvest them when they are bright red. This is a very beautiful container plant that looks like a miniature tree. It can grow between 12 and 15 inches tall.

These are very spicy peppers: they measure between 30,000 and 50,00 Scoville units. These peppers will thrive on a sunny balcony and they are great for container gardens. It’s best to grow them in a warm climate. If you take a good care of it, it can grow about 2 to 4 feet in height. It will benefit from frequent fertilization, but it’s important to use only fertilizers that are low in nitrogen. Nitrogen can make the pepper’s foliage grow too much, but the plant won’t produce much fruit. Mature peppers are about 4 to 6 inches long and they break out easily. Once they are mature, cut them off the stems to use them in the kitchen.

These peppers are extremely spicy, measuring around 100,000 to 350,0o0 Scoville units. These peppers are usually red or orange in color, but they can be in numerous other colors, such as brown, white or pink. Habanero peppers thrive in hot temperatures and they require bright sun. It’s best to keep them in slightly acidic soil, which a pH of 5 to 6. They should never be overwatered. Those who live in hot areas can easily grow a habanero bush that will produce peppers year-round.