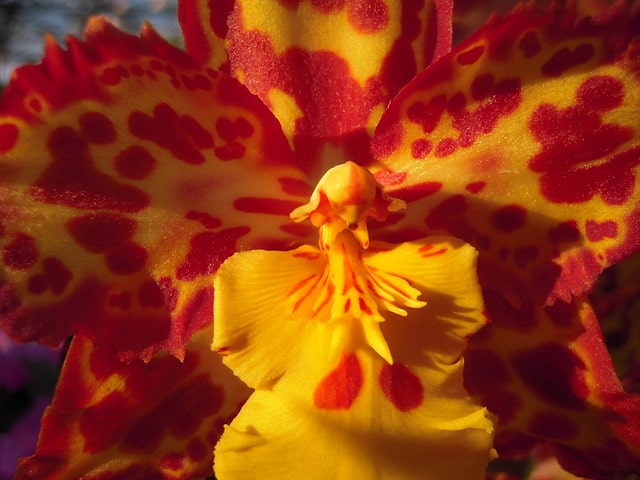 Oncidium orchids, also known as the “Dancing Ladies” are very popular plants known for centuries. Oncidium orchids are among the most diverse orchids in the world. One of the most famous cultivars is Oncidium kramerianum, originally from Colombia and Ecuador. This one is called the “butterfly orchid” because of its golden-yellow flowers with brown freckles. Another popular cultivar is Oncidium known as “Sharry Baby.”

They are one of the oldest types of orchids in the world. There is even a popular illustration of an Oncidium barkerii in the “L’Illustration Horticole” published in 1854. Today, they are cultivated all over the world, anywhere where the temperature is moderate and cool.

Oncidium orchids are among the most popular flowers so many plant growers wish to know how to take care of them. They are often described as temperamental and difficult to grow. However, with proper care, it’s possible to grow them relatively easily. It’s important to know what to do and what NOT to do in order to successfully grow these beautiful orchids.

In order to successfully grow strong and healthy Oncidium orchids, you need to avoid these common mistakes:

We’ll address all of these mistakes individually in order to explain how to avoid them.

It’s important to know how to water your orchid. Overwatering as well as underwatering are common mistakes. Oncidiums generally have different water requirements during different stages of their growth, but a rule of thumb is that they should never be overwatered.

Generally speaking, Oncidium orchids require the most water when they are starting to grow and beginning to blossom. This is the only stage in which they require relatively lots of water that should be provided. After this stage, it’s best to provide less water.

Orchid’s roots actually love water, but the trick is to provide adequate drainage. If not, the roots will drown, lose oxygen and rot. This will make the orchid die. For this reason, overwatering is not a good idea for these orchids.

On the other hand, if you notice that the top compost is completely dry, it’s usually a sign you should water your orchid again. Underwatering, while not as dangerous as overwatering, is also a bad thing for your orchid.

Danger #2: Too Much Sunlight

Oncidium orchids are specific when it comes to light requirements. It depends on their growth stage as well as the time of day and season. When they are first starting to grow and blossom, they need direct sunlight for several hours per day.

Once they start to blossom and give flowers, it’s important to move your orchid to a cooler place without direct sunlight. Too much direct sunlight can actually burn blossoms. Generally speaking, it’s best to keep your orchid in a semi-shady to semi-sunny environment.

Also, note that some oncidium hybrids are different. They often require filtered light to develop and thrive.

Oncidiums need specific humidity levels, at least between 40% and 50%. However, these plants love humidity, so the ideal is actually between 55% and 75%. If you can’t provide that, make sure that humidity levels never drop below 40%. You can always increade humidity by arranging a bed of pebbles with water on a tray below the orchid.

A wrong potting medium can be very dangerous for your Oncidium orchid. These types of orchids generally require lots of food, be it in the wild or when grown in cultivation. For these reasons, the type of potting medium is very important.

They can usually survive in leafmold compost but using this medium is not advisable. It’s important to use the best medium for epiphytes, such as osmunda. Osmunda is ideal for all plants with thin root systems. Its fibers will provide adequate drainage for your orchid, which is important for its growth.

It’s best to use as little compost as possible. Oncidium orchids don’t need a lot or else they can drown in the medium. Make sure to place the medium around the roots and never force it all in. It’s best to leave it loose in order to ensure air circulation. You may also put a layer of rock at the bottom of the pot or a layer of gravel at the top of the compost in order to ensure extra support.

Choosing a correct pot is also important. Never pick a too large pot for your oncidium. These orchids are best kept in small, confined pots. The smaller pot, the better. Large pots will often make the compost moist and very damp, which can harm the roots and make them rot.

Danger #6: Placing them on the same area for the whole year

It’s dangerous to leave Oncidium orchids on one location for the whole year. They should be placed outdoors during summer so they can get enough sunlight. During winter, it’s best to keep them indoors, in special orchid cases or greenhouses. These orchids thrive best when kept in places with temperatures between 80°F and 85°F during the day and between 55°F and 60° F during night.

Danger #7: Too Much Fertilization

These types of orchids need enough food to thrive. It’s therefore important to fertilize them regularly or they will be unhealthy. However, over fertilization is bad for your plant. It’s best to fertilize them once a month with ground manure or liquid fertilizer. Make sure to clean any salt deposits on monthly basis in order to avoid burning the Oncidium orchid’s roots.

Aggressive repotting can kill an orchid. If you really need to repot your plant, make sure to do it gently and with a great care. Oncidium orchids have thin roots so repotting is a very delicate job. They should be repotted about once in every two years. After repotting, it’s important to give them enough water to ensure proper growth of the roots.